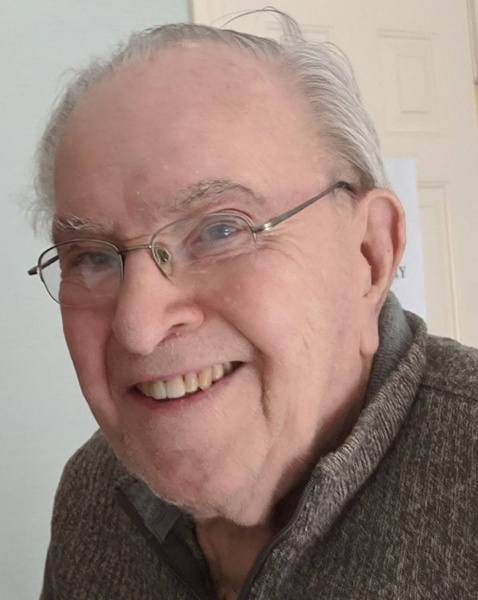 Louis Ira Cooper age 97, passed away peacefully on May 2, 2020, from complications due to COVID-19. Devoted husband of the late Bertha C. Cooper. Loving father of daughter Christine Murray and her husband, Benjamin, of Naperville IL, and son Kenneth Cooper and his wife, Thanae, of Acton MA. Proud grandfather of Melissa Murray of Palatine IL, Catherine Murray of Chicago IL, Emily Paulino and her husband, Walter, of Minneapolis MN, Anna Beltzer and her husband, Matthew, of Concord MA, and Noelle Cooper and her husband, David Hannah, of Nazareth PA. Also survived by nine glorious great-grandchildren.

Lou was born and raised in picturesque Tamworth NH. It was there that he first met Bertha Greenough, a beautiful Boston-area teenager, who frequently vacationed there with her family. He quickly developed a crush on this girl of his dreams, and steadfastly romanced her over the years until, while home on leave from the Navy during WWII, he popped the question.

Lou and Bertha married in1945, and remained in love and inseparable until Bertha's passing in 2002. He wore his wedding ring until his dying day.
After his honorable discharge, Lou and Bertha settled in Quincy MA and, while starting a family and working full-time in Boston, he managed a full course load at Boston University, graduating in 1949 with a Bachelor's degree in Business Administration. He remained with his post-war employer, drama publisher Walter H. Baker Co., for the rest of his working career, for decades serving as Treasurer, and through all those years, and beyond, he always made time for family, church, volunteering, hobbies and travel.

Lou's diverse interests brought him great satisfaction. He was an avid photographer, proudly sharing many creative images with family and friends.
He was a lifelong birdwatcher, and always found joy in the activity of the "usual suspects" at the feeder.

Lou and Bertha enjoyed many travel adventures together, from Hawaii, to California and the Desert Southwest, to numerous European destinations. And if the ensuing slide shows had the family starting to nod off, Lou would come to the rescue with another of his great passions -- ice cream. He never met a dish of scream he didn't like (a trait proudly inherited by subsequent generations), and his family is convinced of that being key to his longevity.
Since his youth Lou was a skilled billiards player, both carom and pocket, and relished countless pick-up matches well into his nineties. But most, and best, of all, Lou was a loving husband and father, and his kindness, fairness and youthful humor (he always had a knee-slapper, or a groaner, at the ready) never failed to brighten the day.

A cheerful "Hello!" A hug when it was most needed. A parting "Luvya!"

He was a fine man. A gentleman.

Donations in his memory may be made to:
Chocorua Lake Conservancy
P.O. Box 105
Chocorua, NH 03817
www.chocorualake.org