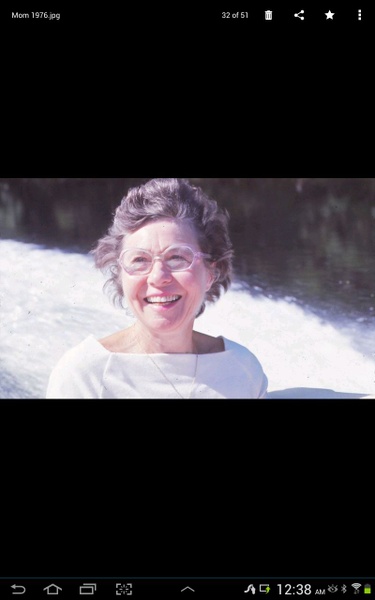 Rev. Margaret (Williams) Crockett age 94 of Concord passed away peacefully on Sunday, August 11, 2013. She was the beloved wife of the late James U. Crockett and the late Frederick E. Dickerman.

Born on August 26, 1918 in Dallas, Texas she was the daughter of the late George B. and Margaret Ellen (Schultz) Williams.

She married Jim in July 1943 and moved to San Francisco while he served in the Pacific Theater during World War II. Upon his return from active duty they moved to Concord, MA.

After raising their four children and working with Jim in his horticultural publishing business, she entered Harvard Divinity School while husband Jim was busy filming Crockett's Victory Garden for PBS.

Margaret graduated from Harvard with a Master of Divinity where she was the recipient of the Billings Prize for Preaching. She went on to receive her Doctorate in Theology from Andover Newton Theological School. Following the death of her husband Jim, she served as pastor of Edwards Church in Framingham for 15 years.

Upon her retirement she joined the staff at the Trinitarian Congregational Church in Concord as a part-time Pastoral Care Associate, a role that fed her passion for being with and caring for people. She often visited shut-ins and convalescents, administered counseling and participated in worship services. Margaret also facilitated a weekly prayer group and administered sacraments. Her devoted ministry involved her presence to others at times of loss – loss of friends, family members, sight, hearing, mobility or independence. Among her most meaningful times of presence occurred when someone went through the ultimate experience of giving up life itself.

As an Associate Pastor at the Trinitarian Congregational Church she offered her presence during times of prayer, Bible study, worship, retreat, counseling, and visitation. She was always present to those during their times of need, rejoicing, crises, boredom, depression, illness, pain, bereavement and loneliness.

She was a proud and active member of the PEO, a women's organization supporting education; the American Association of Pastoral Counselors; and the Association of Clinical Pastoral Education.

Her love, devotion and kindness will be missed by many within the community.

GIFTS IN HER NAME MAY BE MADE TO:
The Jim Crockett Fund
c/o US Trust Co.
100 Westminster St.
Providence, RI 02903
or
The Trinitarian Congregational Church
54 Walden Street
Concord, MA 01742.
www.triconchurch.org