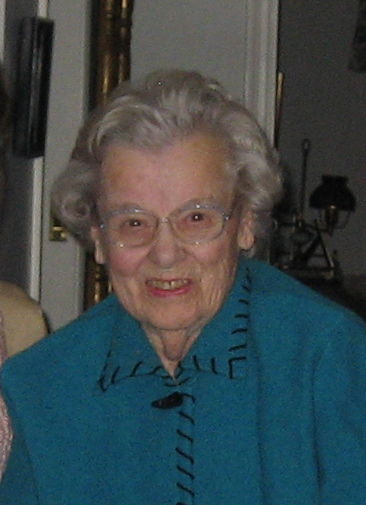 Mary Faxon Willard, 91, a resident of Concord for sixteen years, died peacefully at her home on Friday, November 4, 2011, surrounded by her family. She was predeceased by her husband of sixty-two years, Ralph H. Willard, Jr., who died in 2004.

One of four daughters of the late Huntington Pope and Laura (Greenough) Faxon, Mrs. Willard was born and raised in Cambridge. After graduating from the Buckingham School in 1937, she worked as a secretary at the Belmont Day School until her marriage in 1941.

Following her husband's service in World War II, the Willards settled in Belmont to raise their four children. By her own admission, Mrs. Willard was always drawn to athletics and the outdoors. When not at her children's athletic events, she could be found mowing the lawn, weeding her gardens, or on the tennis court in Annisquam, Belmont, or Lovell, Maine. She was active in church and community activities. Following many years as a volunteer at Mt. Auburn Hospital in Cambridge, Mrs. Willard served as Administrative Assistant to the Medical Staff at Mt. Auburn for eighteen years.

After more than fifty years in Belmont, the Willards relocated to Newbury Court in Concord at its opening in 1994. While in Concord, Mrs. Willard extended her volunteer career to 2003 at Emerson Hospital and brought her interest in flowers indoors to the Flower Committee at Newbury Court.

She is survived by her children, Deborah Sawyer of Concord, Jane White and her husband Robie of Belmont, and Huntington Willard and his wife Vicki of Durham, NC and Sutton, NH; by her grandchildren, Robin Sawyer of Haverhill, Betsy Clarisey and her husband Curt and Jody Swan and her husband Steve of Simsbury, Connecticut, Jeffrey Willard and his wife Nina of Cambridge, Victoria Willard of Memphis, Tennessee, Peter White and his wife Judith of Arlington, Virginia, Brook Willard of Los Angeles, California, and Lindsay White of San Francisco, California; and by five great-grandsons. Mrs. Willard is also survived by her sister Nancy Gourgas of Weston. She was predeceased by another son, Ralph H. (Pete) Willard III, in 1974.

A memorial service will be held at 11AM on Friday, November 25 in the chapel of Trinity Episcopal Church, 81 Elm Street, Concord.


GIFTS IN HER MEMORY MAY BE MADE TO:
Buckingham, Browne and Nichols School
80 Gerrys Landing Road
Cambridge, MA 02138
www.bbns.org