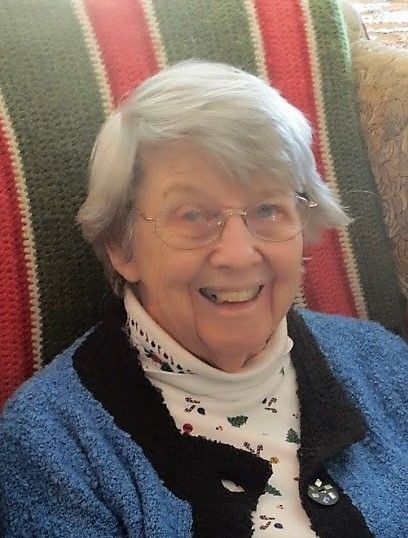 Miriam Krise Young, formerly of West Hartford CT and Baltimore MD, passed away September 25 at her residence at the Inn at Robbins Brook in Acton, MA at the age of 94.

Miriam was born in 1923 in Milton, PA, attended Oberlin College and graduated from Bucknell University. She later received her Bachelors in Music from Westminster Choir College in Princeton, NJ. She worked for many years as a public school music teacher in Baltimore City and Baltimore County as well as a choir director and soloist. She met Milton Young, her beloved husband of 50 years, when he joined her choir at Roland Park Presbyterian Church. When they were married in 1949, the newspaper listing in her hometown of Milton, PA read: "Milton young woman Weds Milton Young." He was the love of her life and they were married for 50 years before his passing in 1999.

Miriam returned to school and earned her Masters Degree in Music from Towson University in 1974. She was very proud of having sung a challenging classical recital for her degree. She retired from teaching when she and Milton moved to West Harford, CT in 1981. There she was an active member of Asylum Hill Congregational Church; a devoted volunteer at Elizabeth Park, one of the oldest rose gardens in the country; and bred and raised Yorkshire Terriers. Miriam loved her husband, her family, her dogs and gardens, her crosswords, her music, her coffee and her evening scotch…although not always in that order.

Miriam lived her full and happy life despite persistent challenges from hereditary eye disease. She was blessed to have cornea transplants in both eyes over twenty-five years ago and was so grateful for the continued gift of sight from her donors and doctors.

She is survived by her two loving daughters, Amanda Young Hickman of Carlisle, MA and Sally Young D'Amato of Washington DC; as well as her sons-in-law whom she adored, Walter Hickman and Rich D'Amato; and her four beloved grandchildren, Lucas and Wyatt Hickman and Lilyanna and Ethan D'Amato.

There will be a celebration of Miriam's life on Saturday, October 20th at 2:00p.m. in the Trinitarian Congregational Church, 54 Walden Street, Concord MA .

Memorial donations can be made to:
Keralink International www.keralink.org
An organization that supports treatment for corneal eye disease.