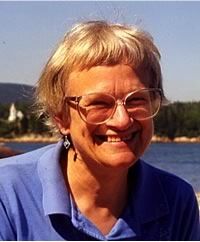 Nancy Garden (1938-2014), prolific author of over thirty books for young people including ANNIE ON MY MIND, one of the first novels for teenagers about two young girls who fall in love, died June 23 at her home in Carlisle, Massachusetts, at the age of 76. With her was her lifelong partner, Sandy Scott. Garden and Scott were married in 2004 when same-sex marriage was legalized in their home state of Massachusetts.

Garden won many awards for her work. Among them was the Robert B. Downs for intellectual Freedom Award in 2000. In 2003 she received the Margaret A. Edwards award, honoring her "significant and lasting contribution to young adult literature." She became an ardent proponent of individual rights especially gay rights because she knew firsthand the challenges faced by young people whose sexual identities were in question. She worked all of her adult life to bring acceptance to the lesbian, gay, bisexual and transgender communities, especially its youngest members, earning her a devoted following who found in her the hero they sought in their struggle to live their lives true to themselves. She contributed to the struggle for gay rights in the best way she knew how: through her writing. When ANNIE ON MY MIND was removed because of its content from a school library in Olathe, Kansas,a lawsuit was brought by kids who, in a landmark case, obtained a victory for the First Amendment rights of adolescents.

Nancy lived and worked for several years in New York City, where she attended the School of Dramatic Arts at Columbia University, but her heart remained in New England and in 1972, she and her partner since high school, Sandy Scott, moved to Carlisle, Massachusetts. It was here, and in summers in Maine, that Nancy lived for the rest of her life.

Gifts in her name may be made to:
National Coalition Against Discrimination
19 Fulton St., Suite #407
New York, NY, 10038
www.ncac.org

Arrangements under the care of CONCORD FUNERAL HOME, a Life Celebration Home®, Concord.