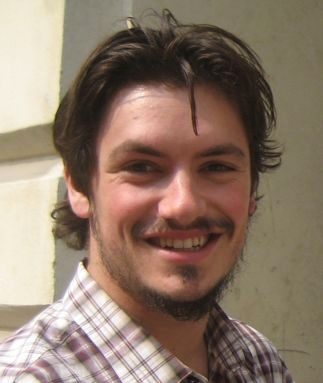 Nicholas dreamed of being able to produce films for the best in the world ...

On May 22, our son and young documentary director Nicholas Dimancescu, 26 yrs old, fell to his death while filming In the Carpathians Mountains of Romania. Recognized for his prior directorship and narration of two documentaries on Romania in WW-I  (HILL 789) and WW-II, (KNIGHTS OF THE SKY) both completed in partnership with the National Geographic Magazine, he developed a sensitive, personal view of tumultuous and tragic times in Romanian history. His grandfather's memoirs of WW-1, his first film production created with colleagues in Boston and Bucharest, was factual and poignant in its direct, honest narration.

Born in Boston on January 13, 1985 and raised in the nearby community of Lincoln, Massachusetts, he developed a lively, open-minded life that relished testing the limits. Educated at Fisher College in Boston, Emerson, Harvard Extension School, and the Art Institute in San Francisco, he focused on those individuals and courses that might tailor a growing interest in the world of history, culture, photography and film.

Early experiences as an intern helping save cave bear fossil in Romania, a project sponsored by the National Geographic Magazine (Romania Edition) and the mentorship of Cristian Lascu, the magazine's editor and cave explorer, introduced him to the world of professional documentary. He set on on his own to explore the 'first signs of human consicousness' in the world of cave painting; he worked with Boston artists to experiment in varied film, music, and digital media; and all the while strengthened an appreciation and love for Romanian culture. Friendships there would stimulate his professional documentary skills further.

In 2011 he launched into an ambitious one-hour documentary with the working title "Decoding Trajan's Column." His goal was to bring alive the landscapes and culture of the Dacian lands conquered by Roman Emperor Trajan in 101-106AD. That task took him into the cave-rich 'Dacian' Carpathian Mountains noted for their unique Dacian mountain and hill-top fortresses that proved an enduring nemesis of the Roman Empire.

On this last assignment on May 22nd, he scrambled up a jagged hilltop to capture a dramatic thunder-storm billowing above the Cioclovina Cave. His last photos were of new Spring flowers and skyline vistas. At 3:45 pm he tripped on a fragile escarpment and fell to his death in a place he loved.

He thrived in the creative vitality of his Allston (Boston) neighborhood and worked hard to promote it. He lived his life to the fullest and brought joy and friendship to those around him. He learned to cook wonderful meals and was generous. In ways that escape so many of us... he understood life's deepest subtleties.

~ We loved him as much as one could expect and were proud of his every moment in life. Katherine, Dan Dimancescu, and Katie Dimancescu

Along with his parents and sister he is also survived by aunts, uncles cousins and numerous friends and colleagues from around the world.

Family and friends will honor Nicholas’ life by gathering for visiting hours and vigil on Friday, June 3rd from 2-8 p.m. in the Concord Funeral Home, Belknap & Thoreau Sts, Concord. His funeral service will be held on Saturday, June 4 at 11:00 a.m. in The First Parish in Concord, 20 Lexington Rd., Concord. Interment will follow in procession to Lincoln Cemetery, Lincoln.

GIFTS IN HIS NAME CAN BE MADE TO:
The First Parish in Concord
20 Lexington Road
Concord, MA 01742
www.firstparish.org