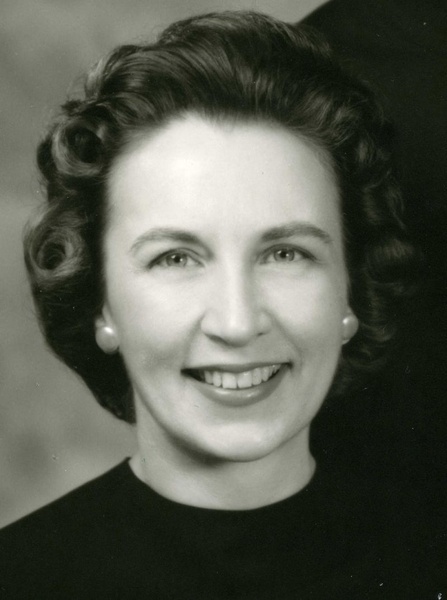 Raised in the high Colorado mountains where wild horses run free, her years were filled with mountain-climbing, playing the piano, listening to opera, and participating in music and acting productions, and accompanying soloists. She grew up with a love of travel. The Thomas family were early supporters of National Geographic, and they traveled every year. An Honors Student, she earned an Honors Scholarship to the University of Colorado.

Her parents gave her a great gift: a love of learning, love of travel, of exploring new places, and having new experiences. During her lifetime she extensively and deeply explored all of the United States, Canada, Mexico, England, all of the Scandinavian and European countries, Finland, Estonia, Russia, Japan, China and Mongolia. Adventurous, she was in China when the termination of communes was announced, and in Russia when Grobachev declared glasnost. In Taiwan, she met with Chiang Kai-shek.

Music was a major part of her life. She entered The University in the College of Music as a piano major. She was there elected to the Music Fraternity. She later re-entered the University in the College of Arts and Science. She was elected President of International House, where she made many lasting and cherished friends from around the world. She was on the Board of International Relations. Her love of international relations, history, civics and music continued throughout her life.

She left the University briefly during World War II to a unique experience. She became secretary to the Commandant of the Prisoner of War camp in Colorado, housing German Officer prisoners. She got the position because she was trustworthy, and fluent in shorthand.

After graduation, and married, she came East. She was Chairman of the Carter Lecture Committee (a community arts group), a Girl Scout leader, and singer in a Gilbert and Sullivan operetta group. She was on the Executive Board of the American Association of University Women (AAUW), in Schenectady, New York, and Wellesley, Massachusetts, Branches for many years. She accepted, as Chairman of the seven-cities, AAUW-sponsored “Teen Arts Show”, the New York State Community Services Award from Governor Rockefeller. In New York, she was on the P.T.A. Board, a library volunteer, and a Sunday School Teacher. She was responsible for the introduction of French into the elementary curriculum of the public schools. She taught school several years in the Niskayuna, New York, School System.

She was passionate about being a citizen of a democracy. She spent the Bicentennial night in Concord, Massachusetts, in the Concord Museum overseeing its safety, as the hordes of people streamed past all night. She spent thousands of hours contributing to the civic and cultural activities of Concord. Coming to historic Concord, corporate-wife obligations pre-empted music participation. She was on the Emerson Hospital Auxiliary, and the Concord Women’s Club. She volunteered many years at the Hospital Reception Desk, the Library, and the Concord Museum, as well as being on the Museum Staff, and in The Guild. She was a member of Milldames, early on, a member of the Lydia Mullikin Society, worked on the first “Picnic in the Park”, and as a volunteer member in the office of First Parish. She is a Life-member of the Emerson Hospital Auxiliary, The Concord Friends of the Library, and the World Wildlife Association.

A person of wide-ranging interests, every year for her enjoyment, she took a graduate course-or-a new-field course; these ranged from “Contemporary Piano Literature” to learning to fly. A favorite was the experience enjoyed as an Affiliate of the Boston Society of Architects. And the classes of the Harvard University Museums.

She was an active volunteer, but first and foremost she devoted herself to raising a loving family. Her dogs were an integral part of her life. She was a great lover of nature, and enjoyed the minutiae, such as the mosses and lichens.

She reluctantly leaves her husband, Gilbert, of 62 years (a retired General Electric executive), and her two dearly-loved sons: Dr. Paul, a radiologist in Florida, and Dr. John, a medical researcher and assistant vice-president at Pfizer in Cambridge.

She was a kind person, a loving person, and generous.