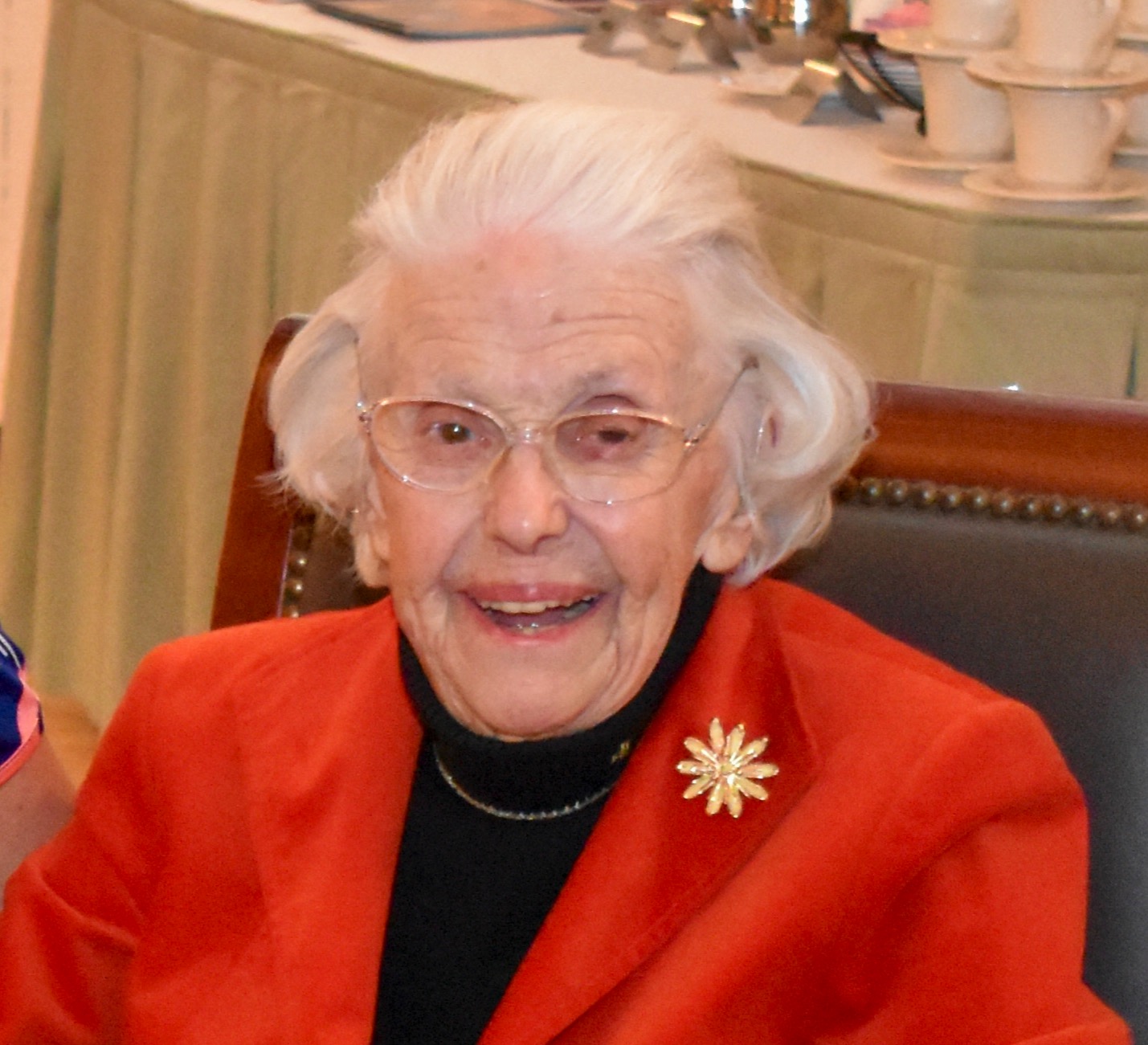 Patricia Swallow Pease died peacefully while sleeping on the afternoon of July 31st at the nursing center at Carleton-Willard Village in Bedford, MA. Born on December 2, 1917, in Yorkshire, England, to Frederick Colin Swallow and Margaret Horn Swallow, Pat lived 104 full years.  The youngest of seven children, she was educated at boarding school and trained for acting at the Royal Academy of Dramatic Art. In 1939, she joined the Women’s Auxiliary Air Force. Through a mutual friend she met her husband Hoyt C. Pease, when he was on business for the Stanley Works in England. When he had to return to the US, he cabled a proposal of marriage which she accepted and, obtaining compassionate leave from the WAAF, she sailed in a convoy to the US. They married in 1940, and lived in New Britain, CT for 63 years. They raised three children: Herbert H. (Bart) Pease II (deceased), F. Colin Pease and Samuel C. Pease.

Pat was an active volunteer in her community and worked at the volunteer information desk at the New Britain General Hospital for 50 years, and later volunteered at Emerson Hospital in Concord, MA well into her 90s. She was also co-founder and active member of the New Britain Repertory Theater, starring in many of their productions. She and Hoyt were members of the First Church of Christ Congregational.  Pat also patiently attended Yale-Harvard football games and boat races for the 64 years she was married to Hoyt.

She often returned to England to visit her brothers and sister and her many nieces and nephews and welcomed their visits to Connecticut and Martha’s Vineyard. Her love of life was unmatched. She played tennis in Bermuda, skied in VT and the Alps, and most of all loved cooking for and entertaining friends and family which she seemed to do effortlessly and was always in the middle of the party.

Pat and Hoyt’s extended family spent much of their summers in Harthaven, Oak Bluffs on Martha’s Vineyard. In the early sixties, she wanted to move to Chilmark, which so reminded her of Yorkshire with its farmland and stonewalls and rented a house without telling the rest of the family. The kids thought “up-island” was mainly for sheep but after two weeks, they agreed it was the most wonderful place ever.  Later, Hoyt and Pat built “Swallow’s Way” (the name says it all) on South Road, which was her favorite place on earth.

After Hoyt died in 2004, Pat moved to Concord, MA where she lived at Concord Greene and attended Trinity Episcopal Church. In 2016, at the age of 98, she moved into an apartment at Carleton-Willard.

A beloved mother and friend, Pat was quick to share her sharp wit and her wisdom gained from a life well lived.  She valued good sense, proper enunciation, and medium level Scotch. Her joyful sense of the ridiculous was with her until the end when she was still able to poke fun at herself and her situation, In whatever medical situation she found herself, she was not going to let it diminish her sense of style or fashion or her stalwart character. Her favorite clothes followed her everywhere. She constantly thanked people for their help.

She leaves behind a grateful family who will miss her very much - Colin and Pam Pease, Sam and Sarah Pease, six grandchildren – Andrew, Grafton, Molly, Abby, Sarah, and Thomas - and fifteen great-grandchildren. She delighted in all the kids and prayed for each great-grandchild by name each morning.

The family would like to thank everyone involved with her care these past few months - the amazing staffs at Carleton-Willard Village, Lahey Hospital, and Caregivers’ & Friends Senior Care - to say the least a wonderfully competent group of people who also could laugh with Mom and us when we all needed it.

A memorial service will be held on Saturday, September 10, 2022, at 11:00 am at Trinity Episcopal Church, 81 Elm St., Concord. Burial will be private at Abel’s Hill Cemetery in Chilmark, MA in September. A celebration of her life will take place next summer at “Swallow’s Way” at a date and time to be determined.