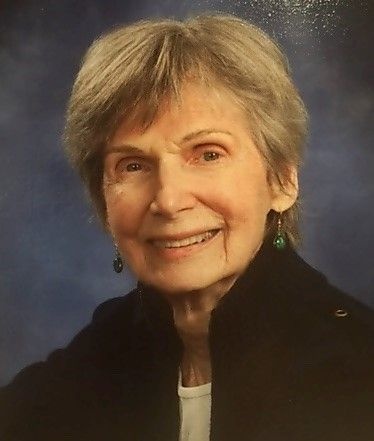 Patricia Watson, a long time Concord resident, died on January 3, 2017. She leaves her beloved husband, Robert, to whom she was married 67 years. In addition, she is survived by two adored children, Brian of Swampscott and Jennifer and her husband Geoff of Arlington. Mrs. Watson also leaves two precious grandsons who reside in Washington D.C. and San Francisco.

Born and raised in Lynn, Massachusetts, Patricia displayed an early love of books and learning. At Lynn, Classical High School, she was a perennial honor student and class officer. During her senior year, she was voted outstanding citizen of the year by her peers for her extensive volunteerism in the larger community. She was also active in the arts, acting in school dramas and playing violin in the school orchestra.

Subsequently she attended Boston University where she majored in English literature. After leaving B.U., she spent the next several years rearing two children. When the children advanced to secondary school, Mrs. Watson began working as a librarian for the Concord Public Schools. In order to gain a specialized skill Mrs. Watson attended a course in the restoration of historical old books, given at Old Sturbridge Village Museum.

When she left the Concord Schools, she held the position of Assistant Director of libraries for the district. She then became a travel agent for several years, scheduling (without the benefit of computers) international trips for many Concordians. As part of her preparation, she often traveled abroad to familiarize herself with destination to which she could send her customers.

Her final formal working position was the Decisions Research, Inc. where she served as a focus group coordinator. Following her retirement, Mrs. Watson worked as a volunteer for over fifteen years at Bedford Public Library.

As a member of the Trinitarian Congregational Church for over fifty years she taught Sunday school for several years, chaired the Library Committee and served on the Christian Education Committee. For more than thirty years Mrs. Watson was an active member of a Couple's Book Club in Concord.

Family and friends will gather to honor and remember Patricia on Saturday, January 21st at 11:30 am at the Trinitarian Congregational Church, 54 Walden St., Concord. A reception will follow in the church hall. A private burial service will be held in Sleepy Hollow Cemetery on Monday, January 9, 2017