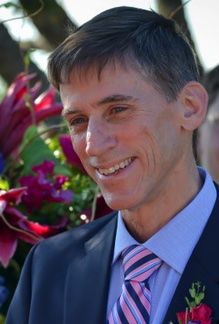 Peter Kirwan Bates, aged 62, died February 1 at his home in Concord, Massachusetts. He lived his life fully, joyfully, enthusiastically and with curiosity, especially in the past 20 months while facing terminal glioblastoma.

Pete, born May 11, 1954 in Manchester, Connecticut, was the fourth of six children born to Ruth Barbara (Tuckerman) and Richard Kirwin Bates. He is described by his eldest sister as a perpetual bright spot in her life, by a friend as having the "sun shine out of his face," and that is indeed how many have experienced him. His position as firstborn son with three older sisters and two younger brothers guaranteed that he was simultaneously well loved, prodigiously teased, and fiercely protective. His friendships with his siblings have carried him through numerous challenges, including his final battle with cancer. He is survived in his family of origin by his stepmother Helen Bates of Massachusetts; his five siblings – older sisters Babs Bates of Maine, Marti Bates of Massachusetts, and Virginia Bates of Montana, and younger brothers Ken Bates of Washington and Doug Bates of Ohio; plus a loving extended family.

Pete learned his practical engineering skills early, working alongside his father on all manner of creative, repair, and construction projects. He attended public schools, graduating from North Andover High School and then from U. Mass. Amherst with a degree in physics. Pete took the path less travelled after college, and after helping his Dad construct a house in Vermont, briefly working as a scientist in a lab, and passing a spell on a sheep farm in Montana, he travelled across the country. Migrating to California to follow the 70s dream, full of youthful enthusiasm and idealism, he joined the Unification Church and became an active fundraiser and team member. He was subsequently matched and married to Denise Noelle Bates (Vouillamoz), the mother of his four children.

Pete later left the Unification Church and moved with his family from Boston to Newton, to a company called Kimat, in pursuit of his engineering dreams. He worked enthusiastically for this small independent company, developing tools and implementing ideas. When the company struggled, he briefly joined General Scanning in a more formal engineering role, which pushed him to find his dream job at Continuum Innovation. At Continuum, Pete was hired to do what he loved – solve weird challenges as part of a team of creative smart innovators. For almost twenty years, he worked on inventing medical devices, construction fastenings, the plastic Target cart, a medical waste disposal system, a new credit card design, and most recently, the squeeze tube for Daisy Sour Cream – his supreme achievement according to many of our friends and relatives as well as the dairy packaging industry!!! He is holder of many patents, although he didn't value those half as much as the engineering discovery process involved in earning them. He built many strong friendships at Continuum, and was always an enthusiastic participant in company functions and discussions.

Pete was always a seeker of truth, authenticity, and knowledge. After raising his wonderful children, he chose to start a new adventure, seeking a soulmate who would help him live his core values. He found this in Sue Rees, whom he married in Maine in 2013. Early on, Pete recognized a kindred spirit in Sue and whispered to her "my true love," which she misheard as "my giraffe." This became their name for each other. Together, they enjoyed kayaking, skiing, rollerblading, sailing, fishing, hiking, extensive travel, reading, listening to public radio, debate, drama, music, celebrations, love, and life. Their greatest joy, besides each other, was entertaining their friends, children, and grandchildren in Maine for hikes, mud-walks, and other outdoor and water-related activities.

Pete's proudest roles were as father and grandfather. He lovingly and unequivocally promoted self-determination, fostered love of the outdoors, supported learning, encouraged curiosity, and pushed for following dreams – and, according to one grandchild, was the best listener in the world. He unconditionally loved his family, and he leaves a deep hole in their midst. He is survived by his four children and two biological grandchildren – Dan Bates of Massachusetts, his wife Katie, and their children Henry and Evie; Chris Bates of Massachusetts and his wife Jessica; Claire Milliken of Virginia and her husband Dan; and Sandra Bates of New York. They will all miss his love. Grandson Henry will miss pirate and seagoing adventures with his Poppy. All will miss his legendary blueberry pancakes!

This quote from "Here If You Need Me," by Kate Braestrup, epitomizes Pete's core beliefs:

I have been so honored to spend five years of my life in the presence of such light, energy, and love. My heart is broken, yet I know it will hold him and carry on – I have evidence that it can be so. Susan Rees Bates

Family and friends will gather to honor and remember Peter on Friday, February 10, 2017, at 10:30 a.m. in the First Parish Church, 20 Lexington Rd., Concord. A reception will follow in the church hall.

Donations in Peter's memory may be made to:
WBUR
890 Commonwealth Avenue
Boston, MA 02215
www.wbur.org