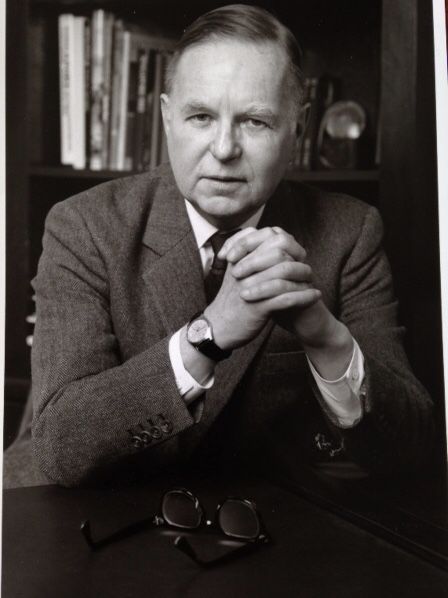 Peter A. Brooke died peacefully in his home on Tuesday morning April 1, 2020. Peter lived a full and productive life and left the world a better place for having lived in it. His common sense, humor, intelligence and his appreciation and devotion to the arts were characteristics that made him exceptional. Foremost, it was an optimistic approach to life that allowed Peter to build companies, forge lasting relationships and embrace family and friends in a meaningful and wholehearted fashion. As one of his granddaughter's noted in a tribute to Peter on the occasion of his 90th birthday, "…your unprecedented knowledge and wisdom from past experiences is what makes you the perfect captain for our ship, the trunk of this tree. I cannot think of anyone more deserving or anyone I would rather see sitting at the head of this table". He loved family dinners, gathering with friends, having a drink with his wife Anne on top of Howe Hill in Pomfret, Vermont where he welcomed passing mountain Bikers and hikers to stop and say hello, discuss books, politics and baseball.

Born October 6, 1929 in Worcester MA to Anna and Percy Brooke, Peter was an only child who spent happy summers in Gloucester MA with his Aunt and Uncle, Elizabeth and Paul Lundberg. His father Percy, was a general surgeon at Worcester Memorial Hospital, his mother Anna a nurse. He attended the Fessenden School '44, Philips Exeter Academy '48, Harvard University '52 and The Harvard Business School '54. While attentive to his studies his real love was sports. He played baseball, football, lacrosse and captained the track team at Exeter. While at Harvard he played football and lacrosse. He was an All American Lacrosse player and never lost his love for the game. In an interview by Carole Kolker he summed it up with clarity. "I loved team sports, and I think to a degree that loving team sports, and actually coaching team sports after I got out of College, I developed a real sense of what a well-coordinated team could do if it worked together, and how one had to manage expectations of teammates that you were coaching. Chemistry was so important between teammates. You could do a great deal with a dysfunctional group of players if they played together and had a common objective. And I bought into that really quite early."

Peter married Anne Russell in 1954 and began a long and enduring partnership with her until her death in the fall of 2016. After marrying, Anne and Peter moved to Baltimore where Peter fulfilled his military service with the Army Audit Agency. After completing his military service Peter and Anne bought a house in West Concord, MA where their first son Samuel was born in 1958. Their second son, Peter was born in 1961 followed by John a year later in 1962. By this time they had bought land on Lindsay Pond Road in Concord MA and began building a rambling modern home in the beautiful Spencer Brook Valley.

Peter was in every sense a true pioneer in the fields of Venture Capital and Private equity. After more than a decade spearheading venture investing at the First National Bank of Boston, Bessemer Securities and Tucker Anthony and R.L. Day in the 1950s and '60s, Peter founded the private equity firm TA Associates in 1968. As his vision broadened beyond the U.S., he spun Advent International out of TA in 1984 with an eye toward creating an international investment platform. With his foresight and leadership Advent grew to become one of the world's largest and most global private equity firms, with teams operating across 12 countries and four continents. Peter's strategic vision was matched by his character. "Peter personified integrity, fairness, humility, diligence and collegiality- the very attributes our firm strives to exemplify today," said James Brocklebank, Managing Partner and Co-Chair of Advent's Executive Committee. Inspired by the Marshall Plan, Peter's career reflected a worldview that venture capital should serve as "an effective economic development tool." His ventures were guided by his passionate belief that "making a contribution to industrial growth, employment, and society is what will distinguish an industry and sustain it over a long period of time."

Peter also devoted long hours of time and energy to his community, including tenure as chairman of the Board of Trustees of the Boston Symphony Orchestra and as an Overseer of Harvard University. He was devoted to supporting his children's education and schools they attended and served on the Boards of the The Fenn School, The Middlesex School and Colgate University. Peter was a Fellow of the American Academy of Arts and Sciences and his book, A Vision for Venture Capital: Realizing the Promise of Global Venture Capital & Private Equity, was published in 2009. Peter had the benefit of sharing the enduring love and care with his wife Anne. Peter always attributed a huge part of his success to Anne. He said in an interview, "Anne was with me. Everyone paid their respects to her, because the fact is in building the network and the company, she had everything to do with creating the atmosphere that was important and conductive to partnership and friendship and working together." Their mutual love of Art, Music and Nature filled their lives with an appreciation for creativity, intellectual engagement and ephemeral beauty.

Although Peter retired from active work at Advent and stepped down as Chairman in 2015, he maintained a keen interest in the firm. As recently as 14 days ago, Peter had an engaging phone conversation with one of Advent's Managing Partners, who discussed how Advent is proactively responding to the current health crisis. Blessedly, his final years were spent at Newbury Court in Concord, MA in the company of Joan Eddy. Meeting and spending time with Joan was truly a gift beyond measure. In a short time, their families joined together in true celebration; they traveled to England, Scotland and cruised the Caribbean. Peter will be missed by many. He leaves behind Samuel Brooke and Gail Weiss, their children, Jason, Robin, Rachel, Simon and Colin. Peter and Ruth Brooke, their children Alexandra and Thomas. John Brooke and his daughter Hadley. He was a passionate, loyal and spiritual man who had faith that people were ultimately here on earth to leave it a better place for those to come.

Family and friends will gather to honor and remember Peter on Saturday, March 19, 2022 at 11:00 am in Memorial Church of Harvard University, One Harvard Yard, Cambridge, Massachusetts


In lieu of flowers, Donations may be made to:
Mass Audubon, designated to the Boston Nature Center.
You may donate online at http://www.massaudubon.org
Mass Audubon
Attn: Sarah Arsenault,
208 S. Great Road,
Lincoln MA01773

The Boston Symphony Orchestra at Friends Office
301 Massachusetts Avenue
Boston, MA 02115
www.bso.org/contribute.
You may also call the Friends Office at (617)638-9276 or email friendsofthebso@bso.org