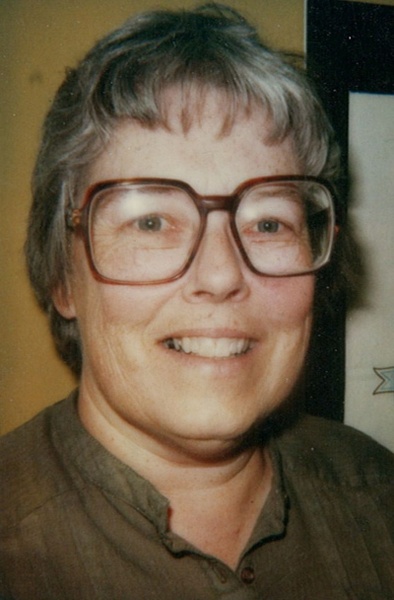 Phyllis Carlson Rickter died on Monday, October 21, at 11:35 am. She was 94. She and her husband Don became residents of Sunrise of Arlington Assisted Living in June of this year. Phyllis was beloved in many different circles for her original mind and organizational genius. She was a feminist pioneer long before the concept became well known.

Phyllis May Carlson Rickter was born in Grand Rapids, Michigan, on September 26, 1925. She was the eldest child of Walter Frank Carlson and Coral Emma Gormell Carlson, a railroad engineer and schoolteacher respectively. A bright and energetic young woman, she attended public schools in Grand Rapids, edited the high school newspaper, and starred in the senior play. Phyllis received a scholarship to the University of Michigan during World War Two where she earned a Bachelor's of Science in Botany in 1947. Many of her lifelong friendships were made in Ann Arbor.

After graduating she moved to Chicago where she worked as a merchandiser for Mandel Brothers department store, then for the Poultry and Egg National Board. She returned to Grand Rapids to edit a series of geography textbooks for the Fideler Publishing Company, and later she worked for a stockbroker in Grand Rapids. She became very active in the YWCA during this time. She also spent the summer of 1954 in Genoa, Italy, as a Community Ambassador. Phyllis spent the following year giving presentations about her time in Italy to civic groups, school groups, and churches, and she had an extensive slide show to share with these groups.

Phyllis moved to San Francisco in 1956 to work as editor of the monthly publication of Poultry Producers of Central California. She began a graduate program in education at UC Berkeley in 1958, and the same year she met Don at the Unitarian Church in San Francisco. Their courtship included fourteen 444-mile treks for Don and was the stuff of legend. They married at Fountain Street Church in Grand Rapids in 1959. Don and Phyllis moved to West Lafayette, Indiana, where Don pursued a graduate degree in Chemistry at Purdue University. Phyllis taught sixth grade in Dayton, Indiana, and also worked as personnel director at J.C. Penney. In 1962 they moved to East Lansing, Michigan, so Don could finish his doctorate at Michigan State University. While caring for an infant she took graduate courses in history and worked as the assistant to the chair of the Physics Department.

In 1964 Phyllis and Don moved to the Boston area so Don could take a research chemist position at Polaroid Corporation. They lived on Chandler Street in Belmont from 1964 to 1969; they bought a house on Hemlock Street in Arlington where they lived until moving to Sunrise in June 2019. She was a member of Arlington Street Church since 1964, serving in many capacities including a Sunday school teacher and a member of practically every church committee including the Prudential Committee. Reverend Kim K. Crawford Harvie has called Phyllis the "Matriarch of Arlington Street Church."

Phyllis was a mentor to many and was committed to feminist political activisor decades. She fought for reproductive rights through NARAL and the Religious Coalition for Reproductive Choice. She served on many committees in the town of Arlington. She and Don were co-Presidents of the Friends of the Robbins Library. She was Associate Member of the Arlington Democratic Town Committee, and she served on the Arlington Civil Rights Committee. She actively supported many political candidates at local, state, and national levels.

Phyllis was an avid quilter and seamstress, making most of her own clothes. She loved to teach sewing, crafts, and cooking. She was a loving mother to David and Paul and grandmother to Avery, Lydia, Callen, and Jasper. Phyllis extended her considerable energies to much wider circles. As a lay minister she traveled to many Unitarian-Universalist churches and is known and beloved by many for her inspirational sermons and for her warmth and empathy.

She had a series of illnesses starting in October 2017 and was diagnosed with dementia.
Phyllis Rickter is survived by her husband, Donald Oscar Rickter, and her two sons, David Donald Rickter Rain of Hyattsville, Maryland (with spouse Anna Reedy Rain and their children Avery Caroline Rain, Lydia Wealthy Rain, Callen Oliver Rain, and Jasper Carlson Rain) and Paul Carlson Rickter of Belmont, Massachusetts (with spouse Ellen Sugarman). Phyllis is also survived by her brother Richard Arthur Carlson of Waterford, Michigan, her sister Margaret Anne Carlson Hedlund of Lansing, Michigan.

Phyllis and Don celebrated their 60th wedding anniversary this summer.