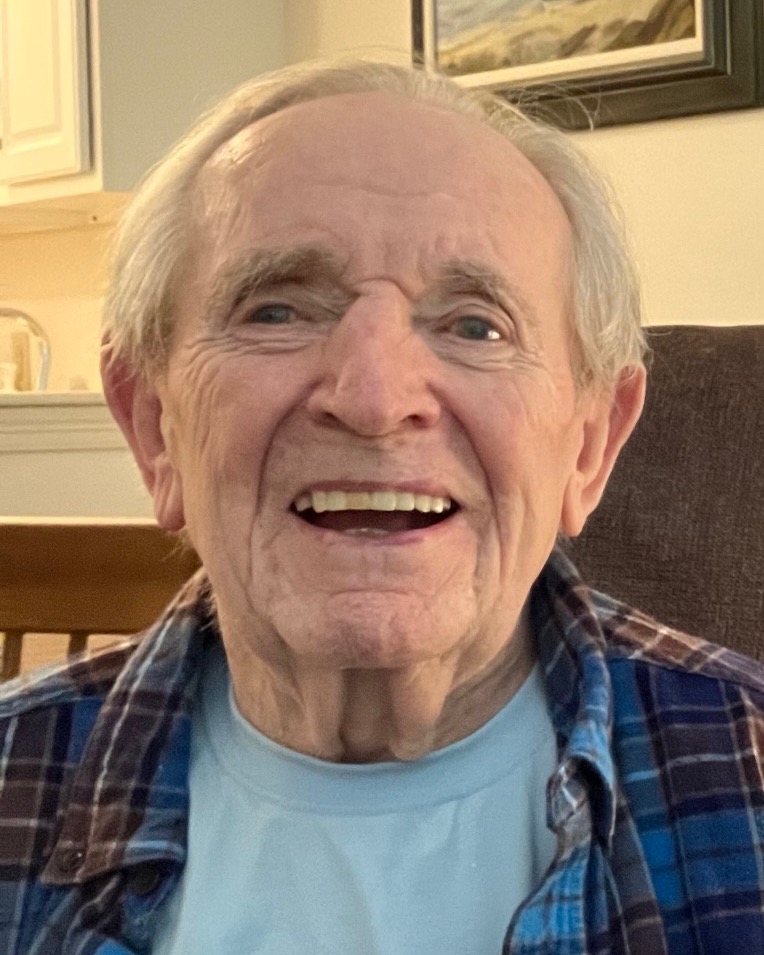 Raymond F. Sundstrom, Jr. age 95 of Deerfield, NH formerly of Concord, MA passed away on Wednesday, December 28, 2022 at the Sam L. Cohen Households at The Cedars in Portland, Maine, with his loving family by his side. He was the beloved and devoted husband to the late Barbara (Strong) Sundstrom who passed away shortly after their 61st wedding anniversary in 2012.

Born in Cambridge, Massachusetts on April 28, 1927, he was the son of the late Raymond F. Sundstrom, Sr. and Elizabeth Edna (Zang) Sundstrom. Raised and educated in Brighton, MA, Ray attended Brighton High School and Valley Forge Military Academy in Valley Forge, PA. At the age of 17, he enlisted in the United States Navy and proudly served his country during WWII. He was stationed in the Pacific seas on three destroyers, and was a seaman on the U.S.S. Norman Scott while the ship protected Tokyo Bay during the Japanese surrender on September 2, 1945. Ray earned a WWII Pacific Medal and an Asiatic-Pacific Area Medal for his service.

After the war he both worked and continued his education, graduating from Brighton High School and, as a night student, earned diplomas in Business Administration from business schools including Bentley School of Accounting and Finance, then located in Boston. While a night student, Ray gained practical work experience in accounting with several accounting firms and became a C.P.A. He earned his Bachelor of Business Administration from Suffolk University in 1958, and a Master of Science in Taxation from Bentley College in 1981.

In 1955, Ray joined the faculty of Bentley School of Accounting in Boston. His career flourished along with the growth of the institution, as it became Bentley College and moved to its new campus in Waltham. After several years as an accounting professor, he accepted an assignment as the Bentley College Director of Placement, and later returned to the classroom where he had a long, distinguished tenure as a Professor of Accounting, Finance and Taxation until his retirement from Bentley College in 1993.

During one of his numerous accounting assignments, he met Barbara, the love of his life, who he married on August 17, 1951. They lived in Brighton and Watertown before settling in Concord in 1957, where they enjoyed raising their young family, first on Monsen Road, and later on Raymond Road.

As a young father in Concord, Ray developed and passed on his love of the outdoors to his children. He loved bringing his children and their friends on ski trips to New Hampshire in the wintertime, and taught his children swimming, water skiing, and sailing at Great East Lake in the summertime. Ray also coached Concord Little League, and served as a Dad Advisor in the International Order of the Rainbow for Girls, Concord Assembly No. 53. As President of Concord Little League, he instituted a rule that each player must participate by actively playing a minimum of at least three innings of each game. His passion for each player’s involvement inspired many of his players to pass on their love of the sport by coaching future generations.

Ray was a member for 73 years of the Major General Henry Knox Lodge A.F.& A.M., the Military Veterans Lodge of the Grand Lodge of Boston.  He was also a member of the American Institute of Certified Public Accountants, and served on a variety of professional organizations in Greater Boston.

In their retirement, Ray and Barbara relocated to their beloved Deerfield, NH home where they enjoyed countless family gatherings, participating in community events like the Deerfield Fair, and cruises to destinations including Alaska, Sweden and the Baltic Sea, the Caribbean, Panama Canal and South America. They loved summers at their lake house on Great East Lake in Acton, Maine, where they gathered with family and friends, and Ray taught his grandchildren about boating, sailing, water skills, and passed on an affinity for the outdoors, instilling his life values in his grandchildren along the way through witty, colorful life stories.

He is survived by his son Ross Sundstrom of Deerfield, NH, and his daughter Beth Ozarowski and her husband Paul of Yarmouth, Maine. His legacy will live on with younger family members including his grandson Alan Ozarowski and his wife Katie Ozarowski, along with their daughters Grace, Mary and Greta, of Brunswick, Maine; grandson Mark Ozarowski and his wife Abbie Collett of Chester Springs, PA; and granddaughter Elise Ozarowski and her fiancé Jake Bleich of Davis, CA. He also leaves his brother-in-law Alan Strong of Greensboro, NC, and niece Noelle Strong, her husband Mark Conklin, and their daughter Emma Strong-Conklin, of Park City, Utah, as well as his cousin Robert Stenstream and his wife Colleen of Ocala, FL.

The family would like to thank Tammy and the staff at Granite VNA, Concord, NH, the staff and administration at The Cedars, Portland, Maine, and his team from Hospice of Southern Maine, Scarborough, Maine for their loving, compassionate care for Ray. This past summer in Portland, Ray looked forward to his bicycle rides around Back Cove, courtesy of the volunteers at the Portland Wheelers.

Family and friends will gather to honor and remember Ray on Sunday, January 8, 2023, from 2:00-5:00 P.M. at the Concord Funeral Home, 74 Belknap St., Concord. His funeral service will be on Monday, January 9, 2023, at 11:00 A.M. in the Trinitarian Congregational Church, 54 Walden St., Concord. Burial with U.S. Navy Military Honors will follow at Sleepy Hollow Cemetery, Concord.

Concord’s town flag will fly at half-staff on Monday, January 9, 2023, in honor of Raymond’s faithful service to his country in the United States Navy during WWII.