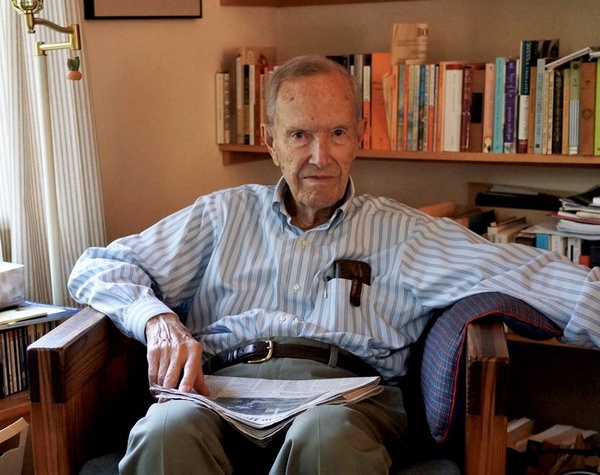 Reed Pierce Anthony, Jr., age 91, a 65-year Concord resident, passed away on Saturday, May 9, 2020 at Carleton-Willard Village in Bedford. He was the husband of Barbara Beatley Anthony, who passed away three days earlier, on May 6, 2020.

Reed Anthony was born in Boston, Massachusetts on November 17, 1928, a son of the late Reed Pierce Anthony and Mary Abbe Hartwell Anthony. Raised in Bookline, MA, and Greenwich, CT, Reed attended Greenwich Country Day School and Milton Academy. He received a Bachelor of Arts degree in 1950 from Harvard College. While in college, he met Barbara, who graduated from Radcliffe College in 1950, and they were married on November 17, 1951. They settled in Concord and raised their family there.

Reed worked as an investment manager at Scudder, Stevens & Clark in Boston until 1968, when he decided to make a career change and move into the nonprofit world. He worked at the Massachusetts Audubon Society from 1968 to 1981, eventually serving as Chief Financial Officer. This position enabled him to combine his financial savvy with his lifelong commitment to environmental conservation. He returned to the world of investment advice in 1982, joining Lowell, Blake & Associates in Boston, where he worked until his retirement in 1990.

Reed nurtured a lifelong fascination with the natural world and the world of books. He was a bird-watcher and enjoyed walks around Concord, MA and Guilford, VT, where his great-grandfather had operated a mineral springs resort beginning in 1869, selling mineral water with a label that proclaimed: "In General Debility and broken down state of the constitution, from any cause whatever, it stands without an equal." Reed and his brother, Nathan Anthony, cherished the family land in Guilford, and in 1993 the family donated 175 acres to the New England Forestry Foundation and the Vermont Land Trust. The resulting Andrew G. Weeks Memorial Forest, named in honor of their great-grandfather, features a walking trail that allows visitors to appreciate the natural surroundings.

Reed was a voracious reader of fiction and non-fiction books. He and Barbara enjoyed attending chamber music concerts at Marlboro College in Marlboro, VT. He was a trustee of the Concord Free Public Library and of the Fruitlands Museum in Harvard, MA, and he was active in Sudbury Valley Trustees, a charitable organization devoted to land conservation. In retirement, he and Barbara traveled widely, preferring adventures by ship and rail, including a voyage around the world as passengers on a cargo container ship.

His eldest son, Benjamin Anthony of Littleton, MA, passed away in 2011. Reed is survived by his children, Charlotte Anthony of Prescott, AZ, and Stephen Anthony of Washington, DC, and by Ben's wife, Jeanne Anthony of Torrington, CT, as well as eight grandchildren.

Private service and burial will be in Guilford, Vermont.

Donations in his memory may be made to:
Concord Free Public Library
129 Main Street
Concord, MA 01742