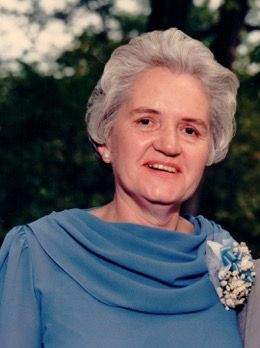 She moved to Concord, Massachusetts in 1949, and lived in Concord for the rest of her life. She married Ralph A. Gerow in 1951, and they remained happily married for the sixty years until his death in 2012. She was a devoted homemaker and loving mother to her only daughter, Nancy Gerow Sumski.

During her working life she served in an administrative capacity for several companies. She enjoyed knitting, sewing, and traveling, but her greatest joy was spending time with her beloved family. She will be remembered as a kind and loving mother, grandmother, aunt, sister, and friend.

She is survived by her daughter Nancy, of Amherst, New Hampshire, her son-in-law, Lawrence, her two grandchildren, Nicholas and Alison, and by Nicholas' fiancé, Erin Lawler.

Donations in her memory may be made to Ruth and Ralph's favorite charity:
Shriner's Hospital for Children
51 Blossom Street
Boston, Mass. 02114.
www.shrinershospitalsforchildren.org/Locations/boston