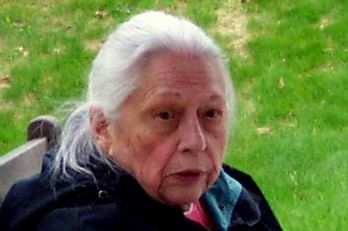 Ruth Ann (Quigley) Mullaney, age 85 of Concord, passed away at her residence on Monday, November 8, 2010. She was the wife of John “Jack” Mullaney. Born in Chicago, IL, on December 6, 1924, she was the daughter of the late Walter T. and Louise (Owen) Quigley.

Ruth was faced with hardship at an early age when her father, Walter, passed away suddenly of a heart attack while golfing. Being the oldest child, Ruth quickly assumed the role of supervisor over her younger siblings and assisted her mother, who had to focus on providing for her family. The family moved east to settle in Newton and Ruth completed her formal schooling in the Newton Public Schools. Ruth attended and graduated from the Rhode Island School of Design in 1953.

After college, Mrs. Mullaney started her career in Boston, doing graphic design work in the advertising industry. After her marriage to Jack, Ruth settled in Concord and shifted to the role of mother to her two sons, John and Matthew. As the children got older she resumed working in the Concord area in a variety of roles, including as a bookkeeper for the Trinity Episcopal Church for many years. Ruth became active in local Concord politics and was a member of the League of Women Voters.

In addition to her family, Ruth’s major interests were art, flowers, and swimming. She continued to pursue her passion in art through painting and graphics work, participating in events at regional art museums including The De Cordova Museum in Lincoln.

The lawn surrounding her home in Concord was a testimony to her love of gardening. Every year her family witnessed the loss of a section of lawn to her expanding plantings of flowers and plants that still bloom each spring.

Swimming was a passion that she acquired as a child while swimming in Lake Michigan. She continued to swim even after sustaining some serious leg injuries while skiing in New England. In the summers, she was a fixture at White’s Pond in Concord and made sure to do her laps just outside the roped off areas. Ruth was a strong proponent of a town pool in Concord as she had to take her love of swimming to pools in Acton or Sudbury. The opening of the pool at the Beede Center in Concord was a great joy to Ruth; she’d long-supported the goal of having a world class swimming facility in Concord, even though her failing health did not allow her to enjoy it personally.

Two lasting legacies to the creativity and tenacity of Ruth Mullaney lie just outside her home on Old Marlboro Road. Ruth decided to give her house a little flair and proceeded to paint her front door a bright orange. While many found this color to be too overly expressive in a surrounding of more hushed tones, Ruth thought this color just perfect. Unknown to Ruth, this colorful door became a landmark for the 11th hole at Concord Country Club, just across Old Marlboro Road. Many a player would remark about a long drive on the 11th hole by claiming, “I hit it past the orange door today!”

Another testimony to Ruth is the sidewalk on Old Marlboro Road. Ruth was strongly behind building sidewalks so that children and neighbors would be able to walk up and down the very busy road without having to dodge the traffic. As Ruth pushed for these sidewalks, the Town of Concord informed her that it would not be able to raise the money and instead was going to provide funding to install sidewalks in another section of town. Armed with a long list of reasons and traffic statistics, Ruth successfully fought at Town Meeting to keep the money directed for sidewalks on Old Marlboro Road.

As Ruth progressed through life, her appreciation for religious studies grew. She was an active member of the Trinity Episcopal Church and loved to sing at the weekly Mass. She enjoyed her Wednesday morning Bible discussion group and the special friendships that came out of those early gatherings.

Ruth also loved watching birds land on her variety of bird feeders throughout the year. Her husband Jack moved a bird feeder just outside the window where Ruth was resting in her final months. It was the sight of these birds that provided Ruth with many hours of pleasure during these peaceful times.