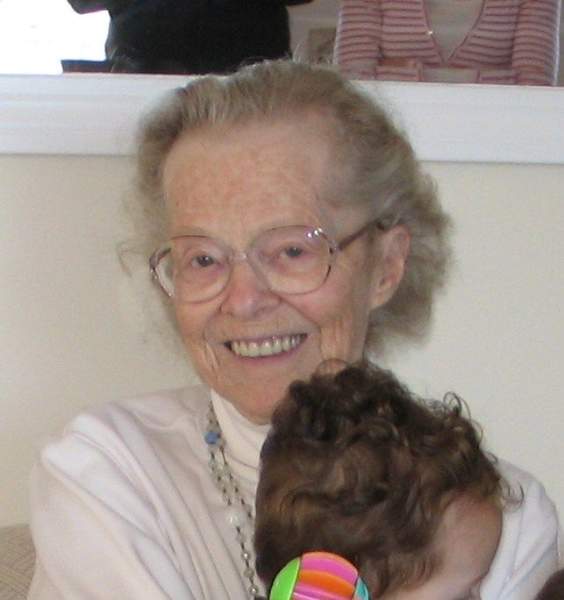 Ruth Ellen Howard was born in Washington, D.C. on April 25, 1923 the daughter of Charles Spaulding Howard and Pearl May Collicutt Howard. She graduated from Theodore Roosevelt High School in Washington, D.C. in 1941 and Bates College in Maine in 1945. From early college days onward she preferred the nickname Rae to her given name Ruth. Rae met Edward Rudolph Sherblom at Bates, where he was a year ahead of her, and they married upon her graduation on June 30, 1945 in Holden, MA. While Ed prepared to become a minister at Andover Newton Theological School in Newton Centre, MA. Rae served as the Marginal Street Settlement House Director in East Boston, MA. Upon ordination in 1947 Ed and Rae moved first to live in the parsonage at First Baptist in North Taunton, MA and then in 1950 to the Central Baptist Church in Tiverton, RI. The first four of their ten children were born while living in the Baptist parsonage and the rest were born after they bought their own home in Tiverton, RI.

In 1957 Ed and Rae founded a new congregation, Founders Memorial American Baptist Church, on a hilltop farm in Portsmouth, RI. Converting the barn into a sanctuary, the house into classrooms, and adding a fellowship hall, this congregation would involve their whole family over the next ten years. Rae completed her M.A. in Education through several years of evening classes at the University of Rhode Island and after her youngest child entered school she took a job as a kindergarten teacher in the local public school. Rae always followed with enormous interest the lives of her ten children, their spouses, and her growing numbers of grandchildren, and eventually great-grandchildren. She retired in the 1980's so that she and Ed could travel with some of their children before Ed's health declined. Their son David died of AIDS on June 30, 1989 and Ed died of lymphoma in February 2, 1992.

Rae spent the last 21 years of her life as a widow. Living first in a cottage on Lake Boon in Stow, where she and Ed had honeymooned, where her children and their growing families could easily visit, and then living in her own apartment at Newbury Court from January 2000 onwards. Rae led an active retired life working in two different church offices, assisting in pastoral visits and providing caring cards, while also organizing the Newbury Court Library, quilting circle, and newcomer's table. Rae was clear she wanted to live only as long as her health lasted. She died June 1, 2013, 36 days after her ninetieth birthday due to declining health. Rae is survived by her younger sister Mary; her children Peggy, John, Don, Jim, Pat, Steve, Paul, Becky, and Joe; her grandchildren Jenny, Eric, Ryan, Sarah, Robert, Lucien, Zoe, Michael, and Kimberly; and great grandchildren Cole, Kyle, Courtney, Connor, Emily, Andrew, Julia, Hunter, and Laney. She was a person of great spirit and leaves an enormous legacy in her growing number of descendants.

A memorial service celebrating her life, laughter and love will be held on Saturday, June 15, 2013 at 10 am in Duvall Chapel at Newbury Court, 80 Deaconess Road, Concord, MA followed by a gathering of her extended family in Tiverton, RI both graveside and down by the ocean she loved.

Gifts in her memory may be made to:
The Aids Action Committee
75 Armory Street
Boston, MA 02119
www.aac.org