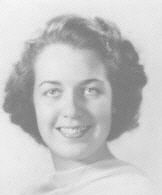 Ruth L. (Clark) Snyder age 88 of Alexandria, VA formerly of Medford, MA passed away on Monday, September 28, 2009 at her residence surrounded by her loving family. She was the wife of Daniel Snyder.

Born in Medford, MA on January 12, 1921 she was the daughter of the late Harry and Louise G. (Dempsey) Clark. She graduated from Medford High School and from Burdett College in Boston. In 1942 Ruth enlisted in the United States Navy (Wave) during WWII.

She married and settled in Alexandria, VA where she was a devoted wife, mother and homemaker. Ruth also worked in the accounting department for various retail establishments.

Besides her husband she is survived by her children, Karl E. Snyder of Springfield, VA, Louise Snyder and Mary Tapp of Alexandria, VA and Carol Hires of KS. She is also survived by five grandchildren, 3 great-grandchildren and a brother Robert E. Clark of Concord, MA. She was also the sister of the late Ralph, Harry and Oliver Clark.