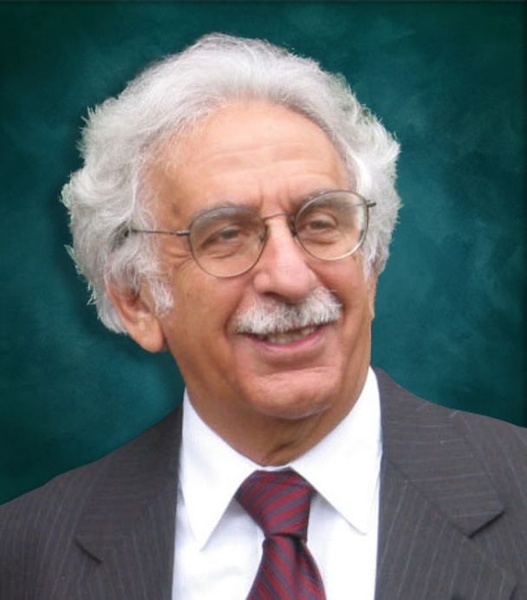 Samuel S. Alexander of Concord, Massachusetts, died June 2 at Emerson Hospital in Concord at the age of ninety-five.

Sam was born on November 5, 1924, in Lynn, Massachusetts, the son of Joseph (Frandji) Alexander of Istanbul, Turkey, and Amelia (Simonetti) Alexander of Senigallia, Italy.

Sam spent his childhood in Lynn in a multi-ethnic neighborhood. His pharmacist father ran a drugstore in the city and was known for helping immigrants write letters and dispensing medical advice. Some of Sam's earliest memories were of being pulled in a wagon by his brothers to the drugstore where he would drink ice cream sodas at the marble counter. He also recalled walking two miles to Lynn Beach with his mother, past the clattering shoe factories; playing marbles and ball games in the street; enjoying 10-cent cowboy movies at downtown theaters; and spending hours in the public library.

Sam graduated from Lynn English High School in 1942 and entered Harvard University, the first of his family to attend college. He was one of the "commuter students,",mostly sons of immigrants. He stayed in touch with these college friends, attending the annual reunion for many years. Needing money for college, Sam took a leave of absence in 1943 to work at the Boston Navy Yard as an electrician's apprentice repairing battleships and landing craft. He also worked at Lynn Gas and Electric. Sam returned to Harvard in 1945, graduating in the class of 1949 with a degree in chemistry.

After college he started work as a research chemist at Ionics, Inc., then located in Cambridge (later Watertown). The company fabricated desalinization membranes, making it possible for people in the United States and around the world to have safe drinking water. Sam was awarded several U.S. patents for his work developing improved membranes. He spent his almost fifty year career at Ionics.

Sam met his wife, Jane (Peck) Alexander at a square dance in Cambridge. Both were wearing Adlai Stevenson buttons and struck up a conversation about politics, a passion they held in common. Sam and Jane married in Princeton, Massachusetts, on October 10, 1953, in a ceremony officiated by Jane's father, Reverend Charles Russell Peck.

In 1955, Sam and Jane moved from their Cambridge apartment to Boxboro, Massachusetts, where they had purchased an old farm house surrounded by woods. Boxboro at the time had only about 600 residents. Despite his city roots, Sam embraced small town life. The household grew to include three children, Sam's mother, and numerous animals, including a cow. They tended a large organic garden and enjoyed swimming at Fort Pond in Lancaster, where Sam had a small Scorpion sailboat.

Sam and Jane volunteered for many community organizations. They helped found the civil rights group, Nashoba Association for Equal Rights, and were also active in the Nashoba Fair Housing Committee. Sam attended the 1963 March on Washington, traveling by bus from Boston. He also served on numerous town committees, including one that developed a more environmentally sound landfill for the town. He was one of the founders and the Chairman of the Boxboro Democratic Town Committee and volunteered for local and national candidates.

Sam enjoyed square and folk dancing with Jane. He served on board of the Country Dance Society, attended Pinewoods Camp, and volunteered for the New England Folk Festival Association.

In 1983, Sam and Jane moved to Concord where they continued their involvement in community and social issues. They organized regular swing, square, and contra dances in Concord as fundraisers for the San Marcos Sister Cities Committee. Sam was also a member of the Shakespeare reading group at the Concord Public Library, a poetry group at Debra's Gourmet in West Concord, and, in his later years faithfully attended the Friday afternoon movies at the Concord Council on Aging. He enjoyed swimming at White Pond and Walden Pond into his 90s and attended the community suppers at Calvary Church in Acton. Sam was an enthusiastic participant at Jane's family reunions in Russell Corner, Princeton.

Sam loved meeting and talking to people of all ages, interests, and political views. He had an intense love of life and shared his deep knowledge and interests with his many friends who enjoyed his company. They will always remember his recommendations of favorite movies like Ninotchka and Coalminer's Daughter; authors, especially Shakespeare; and all types of music, from Bach and Woody Guthrie to Chuck Berry. He enjoyed playing Scrabble and had a knack for writing humorous limericks. Sam also liked shopping in outdoor food markets and eating a variety of cuisine, especially Turkish, Italian, and Armenian.

Sam traveled to Nicaragua, England, Sweden, and the former Soviet Union, and visited family in Colorado and Washington, D.C. Some trips explored family roots where he met relatives of his mother in Italy; explored Istanbul, Turkey; and got together with members of his father's family in London.

Sam will always be remembered for his commitment to activism, justice, and civil rights. He strived to make the world a better place and to create a "more perfect union."

Sam was deeply loved and will be missed. He is survived by three children, Kevin (Sally) Alexander of Fort Collins, Colorado; Faith Alexander of Concord; and Helen Arden Alexander of Silver Spring, Maryland; as well as many devoted friends and family members. He was predeceased by his wife, Jane Alexander, and half-brothers, Aristide (Tony) Vermillio, and Raymond Vermillio.

Due to the current covid-19 situation, a memorial service will be held at a later time.

Donations in Sam's memory may be made to:

Concord Council on Aging (COA)
Make checks out to the Town of Concord with
a note specifying donation to the COA Gift Account
Mail to:
COA
1276 Main Street
Concord, MA 01742
https://concordma.gov/924/How-to-Donate