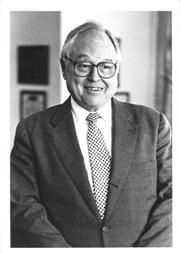 Born in Homer, LA, on June 12, 1921, the eldest of three children, he attended Baylor University in Waco, Texas and the University of Illinois in Chicago, receiving his M.D. degree in 1943. He served as a Lieutenant in the US Navy from 1942-1946. After WWII, he worked in private practice in Harrisburg, Illinois, and was co-owner of the Harrisburg Hospital (formerly the Lightner Hospital). He was a Fellow in Internal Medicine at the Mayo Clinic in Rochester, MN from 1951-1952 and completed a fellowship in Psychiatry in 1956. In 1957 he received his Masters in Neurologic Sciences from the University of Minnesota. He practiced and taught psychiatry at the Mayo Clinic (1951-1958) and at Columbia University College of Physicians and Surgeons (1958-1962) where he was trained in psychoanalysis. He was Professor and Chairman of the Department of Psychiatry at Baylor University College of Medicine in Houston from 1962-1968 and served as Commissioner of Mental Health and Mental Retardation for the State of Texas in 1965-1966. He was Professor of Clinical Psychiatry at Columbia Presbyterian College of Physicians and Surgeons in New York and Deputy Director of the New York Psychiatric Institute from 1968-1972. From 1972 to 1990 he was Professor of Psychiatry at Harvard Medical School. He held the position of Psychiatrist-in-Chief at McLean Hospital in Belmont, MA from 1972-1989. He was Director of the National Institute of Mental Health in Bethesda, Maryland from 1984-1986. In 1989 he became Psychiatrist-in-Chief Emeritus at McLean Hospital. In 1992 the Shervert H. Frazier Research Institute was founded at McLean Hospital. His research focused in part on headache, anorexia nervosa, and violence.

He married Gloria Barger of Harrisburg, Illinois in 1947; she passed away in 2011. They loved Cape Cod and in 1968 began spending summers in Wellfleet, MA. After 1972, they made their home in Belmont, then in Concord, and finally in Acton, MA.

Dr. Frazier is survived by his daughter, Elise F. Woodward, of Concord, and her husband Alan; his daughter, Rosalie Frazier of Bainbridge Island, WA and her husband Ken Rekow, and by his son, Stephen P. Frazier of Wellfleet, MA. His four grandchildren are Lauren Woodward Cronin (Jeffery), Andrew Woodward (Kristen), Virginia Houston (Peter McDermott), and Thomas Houston. He was predeceased by his son David Alan Frazier.

Concord's town flag flew at half-staff on Saturday in honor of Dr. Frazier's service to his country during WWII.

Family and friends gathered to honor and remember Dr. Frazier on Saturday, March 7th at the Trinitarian Congregation Church in Concord. Interment in Wellfleet will be at a later date.

AT A LATER DATE