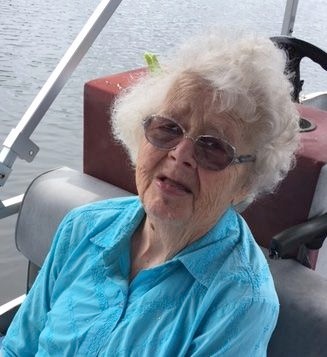 Shirley Ann (Rimbach) Rohan age 91 of Concord passed away peacefully on Saturday, September 23, 2017 in the presence of her devoted family. She was the loving wife of the late George F. Rohan who died in 2008.

Shirley was born on November 1, 1925 to the late parents Fredrick and Anne Rimbach. She was the loving sister of three brothers Philip, David and Robert Rimbach.
Shirley was raised in Acton and graduated from Acton High School with the class of 1944. She went on to graduate from Colby-Sawyer College in New London, NH with a degree in Secretarial Studies. She then worked for the Executive Vice President of General Electric in Boston.

In 1950, she married George Rohan the owner of the South Bridge Boat House in Concord. Together they worked side by side for over 70 years renting canoes, selling boats and small engine repair. Shirley took pride and joy in providing summer jobs for countless local teenagers who she loved and nurtured throughout the years.
Shirley was a woman of incredible strength and humor as she was still bringing smiles to people while launching canoes into the river. She was well known around Concord. She was a member of the United Woman's Club of Concord, the Quota Club of Concord and was the Warden of Concord Voting Precinct 2 for over 35 years. She was also a volunteer at Emerson Hospital for 30 years. In 2009 Shirley was Concord's Honored Citizen, a recognition she cherished dearly. She was also the first recipient of the River Stewardship Award presented by the Wild and Scenic River Stewardship Council and the League of Women Voters.
Shirley was always gracious, kind and loved all her customers, some of whom traveled from all around the United States to paddle on these beautiful and historic rivers.

Family and friends will gather to honor and remember Shirley on Saturday, October 28 at 11:00 am in the Trinitarian Congregational Church, 54 Walden St., Concord. A reception will follow.

Donations in her memory may be made to:
Sudbury River Valley Trust
18 Wolbach Road
Sudbury, MA 01776