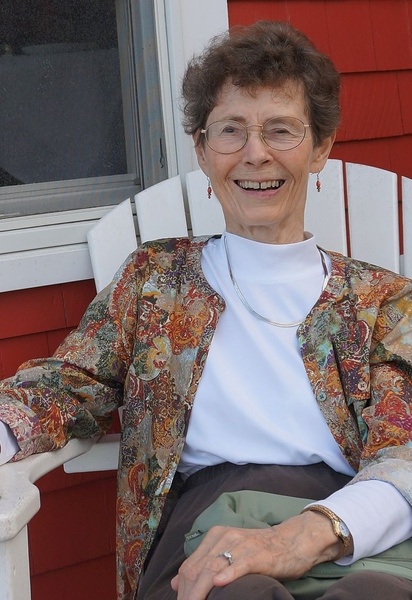 Sylvia Henderson Skinner died on Tuesday October 13, 2020, in Concord, MA, after a brief illness. She was 93 years old.

Sylvia was previously married to Judge Walter Jay Skinner who predeceased her in 2005 after nearly 55 years of marriage. Recently, she was again married to Judge Levin H. Campbell, a fellow resident in Newbury Court, a retirement community in Concord, Massachusetts, where both were living. She was the daughter of Howard and Sarah (Whitman) Henderson and stepdaughter of Lenore Turner Henderson. She was predeceased by her siblings Helen (Honey) McIlwraith, Russell Henderson, and Carol Ganzel.

She was the mother of Sally of Salem, MA; Stephen and his wife Patty Aicher of Montclair, NJ; Jonathan and his wife Martha McLafferty of Hanover, NH; and Tom and his partner Brian Payea of Provincetown, MA. She was the grandmother of Owen Skinner and his wife Eva-Marie Schneeberger, Chris Skinner, Lucy Skinner, Sam Skinner and Anna Skinner. She also leaves Levin Campbell's children and grandchildren, her many nieces and nephews and their children, and her extended cousins.

Born in Cincinnati, OH, Sylvia grew up in Bronxville, NY. Along with her mother, grandmother, and many other family members, she was a proud graduate of Smith College, from which she graduated with high honors. She later earned her Master of Social Work from what is now the Columbia University School of Social Work. She lived in Scituate MA and Newton MA where she and Jay raised their four children. She started working at the South Shore Mental Health Center in Quincy, MA, in 1960 and later worked as Chief Clinical Social Worker at the Cambridge (MA) Guidance Center. Working with a colleague, she co-developed a board game called "Changing Families" to enable children in families with divorced parents to better understand the pain and confusion they may be feeling. She retired in 1992 and in 1996 she and Jay moved to Concord MA, where she volunteered for many years at the Cotting School for students with special needs.

She was an avid photographer and painter and enjoyed many activities including camping, swimming, sailing, and spending summers in North Haven, ME. She appreciated how meeting new people from different backgrounds expanded one's perspective and she was always ready to explore a new walk in the woods. She was devoted to her immediate and extended family and enjoyed organizing and participating in numerous family gatherings.

The memorial service and burial will be private.

In lieu of flowers, the family requests that donations be made to:
Center for Coastal Studies
5 Holway Avenue
Provincetown, MA 02657
or online at https://coastalstudies.org/donate-2/.