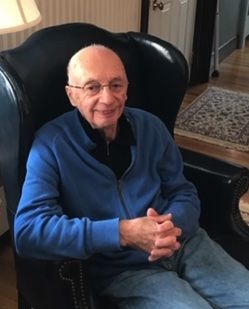 Vincent Joseph Magazzu age 87 and long-time Concord resident passed away on Wednesday, June 24, 2020 at the Kaplan Family Hospice House in Danvers with his loving family by his side. He was the beloved husband of the late Grace V. (Hopkins) Magazu who died in 2018.

Born in Brighton, MA on December 5, 1932 he was the son of Joseph and Jennie (Arno) Magazzu. Raised and educated in Belmont he graduated from Belmont High School with the class of 1950.

Vincent worked his entire career at his cousin's hardware store in Waverly Square, Belmont. He was knowledgeable with anything and everything related to hardware. Vincent was popular with many loyal customers as they sought his expert advice in resolving home improvement problems. At his own home in Concord he took meticulous care of his property and kept busy right up to the end with his own projects both large and small.

Vincent enjoyed quiet walks in Great Meadows Wildlife Refuge and other local historical locations. He enjoyed the simple things in life, going on rides with his wife Grace where they always seemed to end up sharing a coffee ice cream soda at Kimball's Farm in Carlisle.

He was devoted to his family and was a man of deep faith, attending daily Mass at St. Michael's Parish in Bedford. Vincent was an avid reader and he especially loved to read novels written in the early 1900's because of their connections to simple times and simple lifestyles. He kept lifelong connections and friendships made in grade school and high school.

Vincent's simple, humble and charitable way of life provided a strong example for his children and grandchildren.

He is survived by his children, Arthur D. and his wife Brenda of Manchester, NH, Aimee Magazu of Gardner, Chris M. and his wife Lee of S. Weymouth, Mark H. of West Roxbury and Jeanne P. Magazu and her husband David Selsky of Danvers. Cherished grandfather of Matthew, Michael J. Allyson Morgan and Nolan Vincent Magazu. Also survived by his sister Lavinia Harris of Winchester. He was predeceased by his grandson Michael Joseph Magazu.

Vincent's funeral mass at St. Michael's Church in Bedford followed by burial at St. Bernard's Cemetery, Concord will be private.