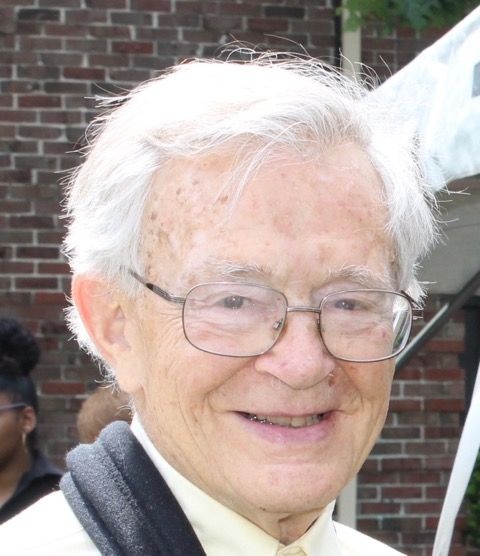 William Andrews of Concord, Professor Emeritus at Harvard Law School, passed away peacefully on Sunday, May 21, 2017. He was the husband of Shirley Herrman Andrews for 63 years.

After his naval service, Bill worked as an associate for Ropes & Gray in Boston and in 1961 began teaching at Harvard Law School. He always wore a bowtie and timeless-looking suit and was known for his brilliant mind, sense of humor, and dedication to his students. He became a full-time professor of law in 1963 and the Eli Goldston Professor of Law in 1984. William is the author of widely-used tax casebooks, as well as many articles. In 1974, Bill published a seminal article in the Harvard Law Review, which catapulted him into the spotlight by starting an ongoing national tax debate. He argues that a national consumption tax instead of the present income tax would be fairer. In 1977 Amherst College acknowledged his valuable cutting edge ideas with an honorary degree. In 2015 the American Tax Institute awarded him the Daniel M. Holland Award for his lifetime achievements.

Bill was a skilled classical pianist. His six children remember falling asleep many nights to his beautiful music. He particularly enjoyed playing Beethoven sonatas, as well as accompanying his wife and other chamber musicians.

Bill served many years on Concord's Board of Appeals and on the Harvard COOP Board of Directors. He was a long-time member of Concord Social Circle. With his baritone horn, he helped launch the Concord Band, and he sang joyfully in the Trinity Church choir.

In 1965, Bill and Shirley drove a VW bus, loaded with five of their children, all under the age of nine, from Massachusetts to California, to his summer job teaching at Berkeley Law School. The next summer, they all drove to Chicago where he taught at the Law School and then to a family dude ranch in Colorado. Seeking more adventure and natural beauty, Bill and Shirley, with all six children, hiked in the Jotunheimen in Norway in 1972. Their youngest child, Carol, was five and often rode on Bill's shoulders. Over the next ten years, Bill, with Shirley and some of his children, ventured on 10-day backpacking trips in the Sierras and Rocky Mountains, as well as hiking the Highland Way in Scotland. After the children grew up, Bill and Shirley would vacation in the summer all over the world. They trekked in the Atlas mountains of Morocco, the Cordilla Blanca in Peru, the Swiss Alps, the Alta Plana in Bolivia, the Canadian Rockies, the Altai mountains of Mongolia, and the Himalayas in both Nepal and India.

Bill loved solving puzzles. It didn't take him long to master the Rubics cube, and he was completing Sudokus right up to his final days. Gracious, kind, and modest, he was an excellent listener, enormously helpful to others trying to solve their problems. He tended to be private, but was always up for a party--a dessert, a drink with others, laughing and having fun. Even in his eighties, if one of his children or grandchildren got down on the floor, Bill would likely get down there, too, smiling, sharing.

Family and friends will gather to honor and remember Bill on Saturday, October 14, 2017 at 11:00 am in the West Concord Union Church, 1317 Main St., Concord. Harvard Law School is also planning a memorial event. A private family burial with U.S. Navy Military Honors was held at Sleepy Hollow Cemetery, Concord

Donations in his memory may be made to Amherst College in memory of William D. Andrews '52, either online or by mail to the Office of Development, PO Box 5000, Amherst MA 01002.