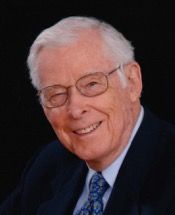 William "Bill" Howe Warren, 92, a resident of Yellow Springs, Ohio from 1952 until 1978, died on Dec. 8, 2016, in Concord, Massachusetts, surrounded by his loving family. The cause of death was complications of pancreatic cancer, diagnosed a month after his wife Kerrin died in late August, 2016. They were devoted to each other through 69 years of marriage.

Bill was born December 20, 1923, in Holden, Massachusetts, the son of William H. and Edith (Brierly) Warren. Born a Yankee, he was descended from John Warren, who sailed to the Massachusetts Bay Colony with Gov. Winthrop in 1630, and related to Dr. Joseph Warren, who fought and died at the Battle of Bunker Hill. His family lived in Holden for four generations, first tanning and then manufacturing the leather belting that powered New England's industrial revolution. He was the youngest of three children and grew up next to the town fire station, which figured prominently in his childhood memories. He attended Holden public schools, where he participated in numerous committees, theatricals, and public speeches, and was dubbed "best student" and "most dependable" in his high school yearbook. The stage was set for a life of service to higher education and the local community.

In 1942 Bill headed west to Oberlin College, Oberlin, Ohio, where, legend has it, Kerrin spotted him in a yellow sweater on the first day of classes and thought, "He's for me!" He joined the U.S. Naval Reserve during the Second World War and was soon called to active duty, serving as Paymaster and Supply Officer on an amphibious personnel transport ship, where they reputedly sold soap at 8 cents a bar, 3 for a quarter. At the end of the war he returned to Oberlin, married Caroline "Kerrin" Harker Morris of Poultney, Vermont, in 1947, and received his A.B. degree in Psychology in 1948. He went on to earn an A.M. in Education from the University of Chicago, and a Doctorate of Education in counseling psychology from Harvard University.

Influenced by Carl Rogers' humanistic psychology, Bill was excited by innovative ideas that aimed to increase students' responsibility for their own learning and broaden access to higher education. After serving as an Admissions Counselor at Chicago, he and Kerrin arrived in Yellow Springs in 1952. During the next 23 years, he worked in nearly every office at Antioch, beginning with admissions and the work-study program. As Assistant and Associate Dean of Students in the late 1950s-60s, he played a key role in developing the First Year Program, which anticipated today's freshman seminars and advising groups; he also bailed numerous students out of jail in those tumultuous years. As Senior Vice President in the late 1960s-70s, he oversaw the experimental programs of the Antioch network, and also served on the planning committee for The Evergreen State College in Olympia, Washington.

Bill and Kerrin raised two sons in Yellow Springs, Bill, Jr. (YSHS 1972), now professor of cognitive science at Brown University, Providence, Rhode Island, and Rob (YSHS 1976), currently Managing Director of Conservation with the Trustees of Reservations, Massachusetts. In 1969, the family spent a formative year on Kauai, Hawaii, where Bill directed a cross-cultural field study program for the Union of Experimenting Colleges and Universities, while Kerrin enjoyed tropical gardens and beachcombing and the boys body-surfed and explored tidal pools.

Bill and Kerrin moved to Silver Spring, Maryland, in 1978, where he served as Vice Chancellor of University College, the continuing education campus of the University of Maryland. Subsequently, as executive officer of a commission on the adult learner for the American Council on Education, he developed guides for new programs in adult education, evaluation of real-world experience for college credit, and remote learning for adults using early internet technology. Throughout his 40-year career, Bill worked to develop innovative approaches to liberal arts education and to broaden access through financial aid, new technology, and strategies for postsecondary adult education.

In 1988, Bill and Kerrin retired to an 1806 brick tavern near Middlebury, Vermont, Kerrin's home turf. They loved rural life against the backdrop of the Adirondacks, and together planted extensive flower and vegetable gardens, played cutthroat rounds of Boggle and dominoes, and enjoyed visits from many friends and their four grandchildren.

Bill was admired for his steady hand, keen intelligence, and inclusive administrative style. His Yankee reserve was frequently punctured by a dry sense of humor. He was gracious and kind, a Rogerian listener who operated on the principle: make it work. Wherever he was, he worked determinedly to make things better for the people around him, relying on his understanding of group dynamics more than the bully pulpit. In Yellow Springs, he served as an Elder of the First Presbyterian Church and a member of the Miami Township Fair Practices Committee, working to desegregate local businesses. At the Congregational Church of Middlebury, he chaired the Board of Deacons, led the Committee on Civil Unions to declare the congregation 'open and affirming' of LGBT people, and chaired the search for a new minister. Although he did not consider himself a deeply religious person, he believed that the example and teachings of the historical Jesus could have a positive influence in society, and he worked steadily toward that end.

He remained an active alumnus of Oberlin, serving as President of the Alumni Association, Alumni Trustee, and President of his 50th Reunion class. One of his proudest accomplishments was establishing the World War II Memorial Garden and Scholarship Fund to honor the 75 Oberlin alumni from both sides of the conflict who lost their lives in the war.

In 2009, Bill and Kerrin moved to Newbury Court, a retirement community in Concord, to be closer to their sons. There he chaired the Staff Scholarship committee, engineered the equitable distribution of the staff appreciation fund, increased his consumption of spy and detective novels, and fired off letters to the Editor of the NY Times. He devoted the final few years of his life to caring lovingly for Kerrin as she struggled with vascular dementia. Inspired by Atul Gawande's Being Mortal, his last project was to help envision a new, humanized nursing facility. His later years were guided by two maxims, posted on the apartment wall: "What Is, Is" and "Carpe Diem."

He is survived by his son, William Howe Warren, Jr. of Cranston RI, his wife, Ellie Siegel, and their children, Jonah and Sophie; and his son Robert Llewelyn Warren of Newton, MA, his wife Sally Mazur, and their children, Jake and Lucy. He was preceded in death by his wife, Kerrin, his sister, Rev. Barbara W. McCall, Claremont, CA, and his brother, Henry W. Warren, Chicago, IL.

Bill's family and friends will gather to celebrate his life on Saturday Feb. 11, at 1:30 pm, in the Trinitarian Congregational Church of Concord, MA (no flowers, please). Memorial gifts may be made to Oberlin College, designated for the William H. and Caroline Morris Warren Scholarship Fund, and mailed to Oberlin College Development Office, attn: Catherine Gletherow, 50 West Loraine St., Oberlin, OH 44074.